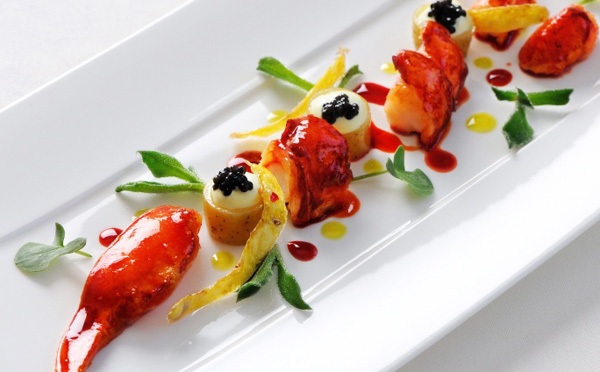 This is a signature dish of Chef Raymond Blanc and is served at the two star Michelin Restaurant Le Manoir aux Quat' Saisons in Oxford England.

Serves 6 as an appetizer or 4 as a main dish

Raymond Blanc brings together our sweet native lobsters - at their best and most plentiful in summer and autumn - with cardamom in this very special dish. From Raymond Blanc Kitchen Secrets (S2)

For the curry oil, toast the curry powder in a small dry frying pan over a very low heat for five minutes, shaking the pan from time to time. This will bring out the natural oils in the curry powder.

Infuse for one hour in a warm place, then strain through a fine sieve or muslin cloth into a small bowl. Add the salt and lime juice, taste and adjust the seasoning as necessary, then cover and set aside.

To kill the lobster, insert the point of a sharp knife through the cross at the back of the head and split the head into two pieces between the eyes. Turn the lobster around and split down the length of the body. Remove and discard the black intestines from the middle of the tail and the grey dead mens' fingers from the head. Separate the tail, claws and head from the body.

In a large pan of boiling water, blanch the tail in the shell for 10 seconds, then remove with a slotted spoon, place on the crushed ice for 10 minutes and then drain and reserve in the fridge.

Place the claws in the boiling water, turn the heat down to a simmer and cook for five minutes. Remove with a slotted spoon, place on the crushed ice for 10 minutes and then drain.

Using a pair of scissors, cut the tendons holding the small pincer claw to the large claw, twist gently and remove the pincer shell.

Chop through each joint of the claws. Using a meat hammer, gently break the shells of the claws and remove the meat, keeping it intact as much as possible. Discard all the shells.

Remove the lobster tail from the fridge and separate the meat from the shell. Chop the shell into small pieces and set aside the shell for the red pepper reduction.

Mix two teaspoons of the curry oil, and the ginger, cardamom, sea salt and lobster flesh together in a large bowl.
For the red pepper reduction, put the chopped red pepper through a juicer, or purée in a blender, and pass through a fine sieve.

Heat the olive oil in a medium frying pan over a high heat and cook the chopped tail shell for 2-3 minutes, stirring from time to time.

De-glaze the pan with the wine, then add the red pepper juice, ginger, cardamom and cayenne pepper.

Cook until the volume of liquid has reduced by half, then stir in the dissolved arrowroot (or cornflour) and simmer gently to thicken.

Pass the reduction through a fine sieve, pressing the shells to extract maximum flavour. Check the seasoning, adding a little more cayenne pepper if needed, and set aside.

For the potatoes, cut each cooked potato in half and toss them with the curry oil and salt. Check the seasoning and set aside in a warm place.

Heat a lightly oiled plancha or large ovenproof frying pan to a high heat and sear the pieces of lobster meat for one minute. Set the claw meat aside and finish the meat from the tail in the oven for three minutes.

Place the lobster meat in a large bowl and glaze with half of the red pepper reduction.
Assembly

To serve, place three halves of potato down the middle of each plate and top with the yoghurt and caviar. Place the lobster meat on the plates and drizzle over the curry oil and remaining red pepper reduction. Serve garnished with the potato skins and salad leaves.

Want to Own or Operate your own Restuarant --- Culinary Management


This video shows the Two Michelin starred chef Gary Jones creates lobster on a plancha, potato and caviar in this video who is executive chef in the kitchen at Raymond Blanc's Le Manoir aux Quat' Saisons since 1999.. 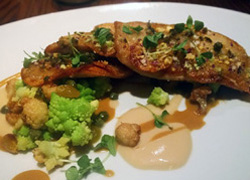 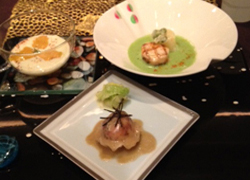 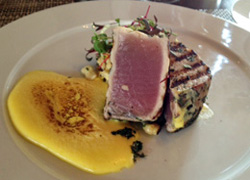 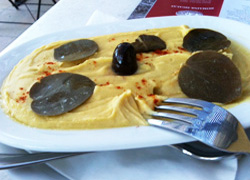 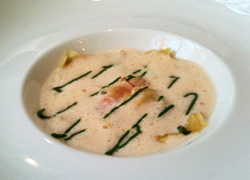 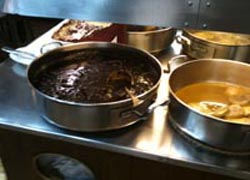 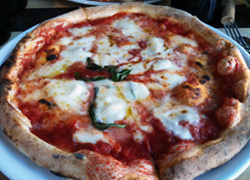